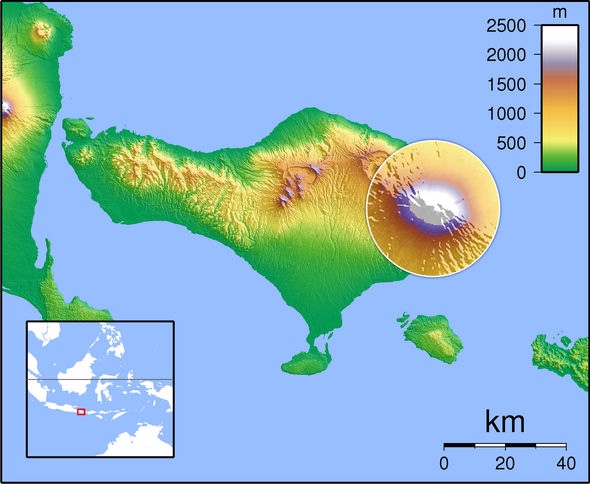 Who really knows what’s about to happen.

The press over the last week and lots of social media sites have been hyping this up into a state of hysteria but as I write this article nothing has happened.

The issue here is that this type of speculation really affects so many different groups such as the local Balinese who live near Mount Agung on the East Coast of Bali, travellers throughout the world who have decided to risk it and fly to Bali because they have already bought plane tickets, holidaymakers who are currently in Bali and are scared to stay because of the risk that the ash cloud from the volcano will close Denpasar’s Ngurah Rai International Airport leaving them standard as well as local businesses, tourism operators all who rely on the influx of tourists.

While we are not experts in volcanos or geologists what we can give you is as much information as we have so you can clearly make your own decision as to whether to come to Bali in the next couple of months or look for another holiday destination. To some Bali addicts like us who need their Bali fix this may be somewhat hard to swallow – the mere thought of going somewhere else is simply not an option. It’s either Bali or nothing, but have a look at the facts and make an educated decision. Obviously, if you need any further information please do not hesitate to email us here at Bali Villa Escapes or call our Sydney office on 0402 222 605.

Where is Mt Agung?

Mount Agung is one of the hundreds if not thousands of active volcanos in Indonesia and it lies in the Karangasem Area in East Bali. It’s roughly 70 km from Seminyak (a very popular tourist area). It’s a known tourist hot spot as travellers from all over the world come to Mt Agung to marvel at its sheer beauty and to climb it to see the gorgeous sunrise.

Mt Agung last erupted in 1963 and it’s devastation was he with over 1500 people dying due to the ash and the explosion. Luckily, the Balinese have taken precautions by evacuating well over 100, 000 people who are within the vicinity of the volcano and who could be affected by the ensuing eruption. They are all living in shelters far away from Agung as a precautionary measure.  So you can see that the government is taking this extremely seriously and looking to avoid any loss of human life. This has been going on for the last 7 days but as of yesterday, we did read on the Sky News website: http://www.skynews.com.au/news/world/asiapacific/2017/10/01/bali-volcano-evacuees-told-to-return-home.html

that it was safe for some locals to return home. You can take what you like from this story but it shows that the likelihood of an imminent eruption seems somewhat unlikely. Having said that, no one can predict what’s likely to happen so you have to make the choice based on the facts we are presenting here.

Why is the volcano active?

Mt Agung has been casing tremors and earthquakes over the last month or so and they seem to be magnifying in their intensity promoting the alarm. Seismic activity between Sept 17th & 21st saw a significant spike in dark smoke and steam coming from the volcano; hence the panic and the news cycle stories. Remember it’s just smoke at this stage and nothing else whatsoever. Things escalated somewhat when on the 29th of Sept there was a lengthy white plume of visible smoke coming from the volcano which did cause even more of a panic and speculation that it was going to pop. To this day still, nothing has happened. The wait continues.

What are the affected regions if the volcano erupts?

A photo supplied by the  Daily Express in the UK shows the immediate areas affected once the volcano explodes and as you can see it’s predominantly the East Coast of the island which is far away from the main tourist areas of Seminyak, Legian, Canggu and Kuta. The areas that would be affected are lesser-known villages ( for most Australian travellers) Amed and Sidemen. There would however be ( and this would be terrible) if the famous temple Besakih was affected or destroyed. Some of the villas in Candidasa we rent out would be safe as they are sound 25-30km away from the volcano. We have actually visited some owners of villas in the area such as Villa Adasa & Villa Oceana who have all said that life is as usual and people are feeling OK, relaxed and the tourists that are in the villas are fine. This is the state of play at the moment. 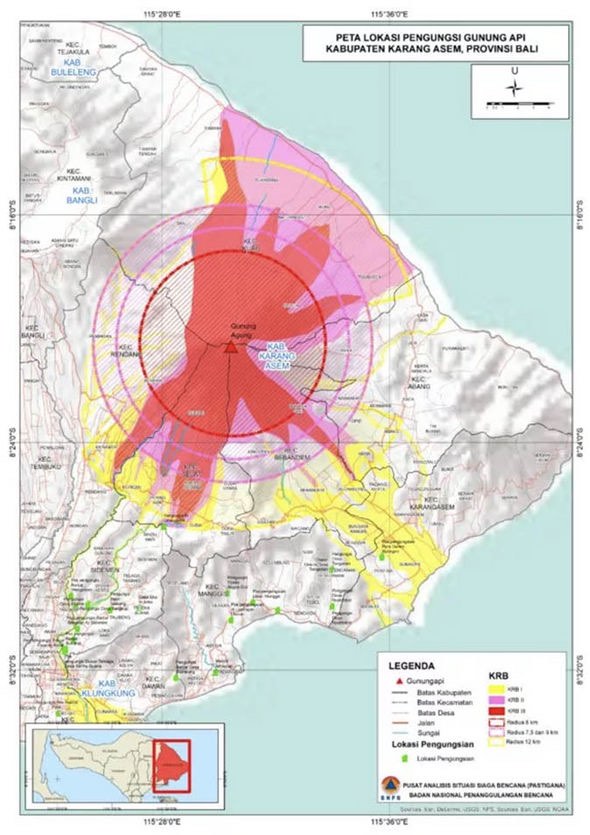 What does the Balinese Government say?

Well they have released a statement and this went throughout the major newspapers and websites stating the below and this is dated the 29th Sept 2017. As an ad on as of today 2nd Oct 2017, the airport is open, all flights between Australia and Bali are operating as normal, fast boats to the Gili islands are as per schedule, Seminyak is buzzing, the beach is busy at sunset and the restaurants are all packed and a friend told me that the queues getting into Bali at immigration are as long as usual. For want of a better word, it seems as though it’s business as usual. 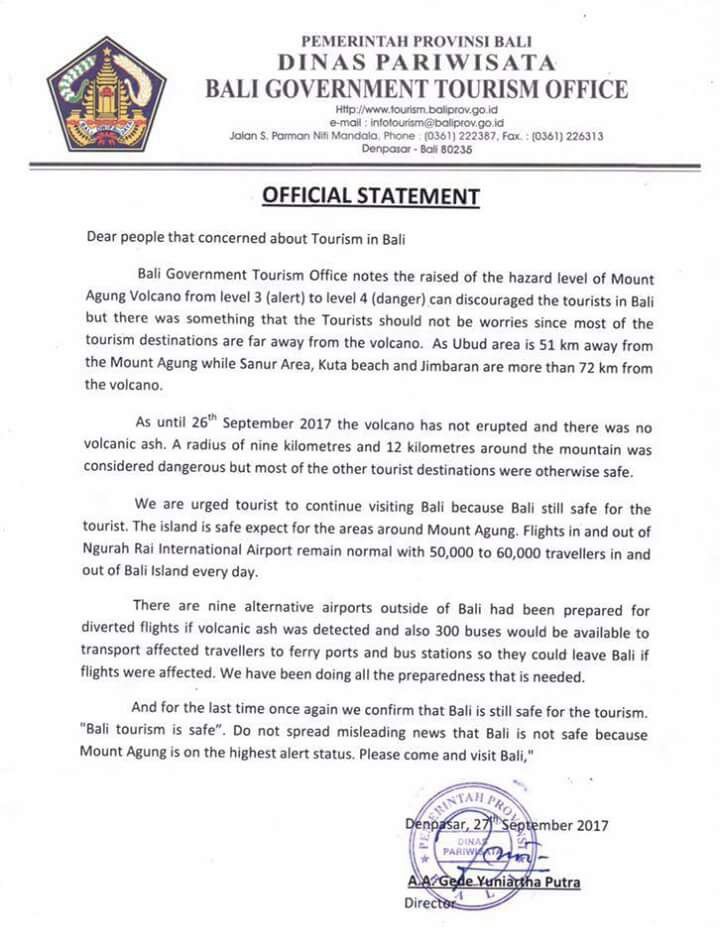 Ubud is 50km’s from Mount Agung

Kuta is 70km’s from Mount Agung

Seminyak is 75km’s from Mount Agung

But, if there was an eruption what would happen and what do you do if you’re in Bali?

The repercussions are all dependent on the wind direction. Funny how this works but if the winds are blowing to the north then this would blow the ash cloud away from the airport which would keep it open. Conversely, if it’s blowing in a southerly direction then I’m afraid it would be closer to the airport and travellers would have to take flights from other airports. They would have to make their way to java or perhaps Lombok but this would be for the airlines & Government to decide.

At present, the good news is that the winds are blowing in a north to north/east direction for the next few weeks at least which would keep the airport open. The shift in the wind direction will happen only in mid-December for the rainy season when they shift south.

If the airport is closed in Bali the Minister of Transportation has said that Bali is prepared and all passengers will be able togged to their destination. Alternative airports have been organised such as Banyuwangi Airport and Praya Airport, or Surabaya Airport by land.

This should give holidaymakers peace of mind if they are in Bali for an extended period of time. According to this, no one will be left stranded.

What is Bali Villa Escapes doing at the moment?

Most of the villas we manage or rent out are in the Seminyak, Umalas, Oberoi, Legian and Canggu areas. In fact, that covers about 80% of the villas on our website. We are at the airport every day still picking up guests and taking them to the villas as the airport is still open and does not look like closing unless something happens: http://balitourismboard.or.id/page/crisis-center/bali-airport-is-operating-as-normal.html .

In conclusion, this is really your call but we strongly urge you to take out travel insurance as the mountain can be unpredictable and anything could happen at any time of the day. I guess it’s just a waiting game for now till we see and reassess the situation every couple of hours. For now, it seems ok, but you need to keep abreast of what your airline is saying and what the Aust Government is saying.

There has been lots of activity on Mount Agung with ash clouds disrupting the holiday plans of travellers with Jetstar and Virgin cancelling all flights periodically. Loads of standard passengers are still at Denpasar airport waiting to leave. There are flights still coming into Bali but these seem to be from other carriers. The has not been a full-blown explosion or eruption but the likelihood of this according to many newspapers seems imminent putting the travel plans unfortunately of many holidaymakers into total chaos.  This is the latest news we have:

Should I cancel my holiday in Bali because of the volcano?

If you are really keen to get to Bali there are other ways you can do this. You can fly to Jakarta and then catch a domestic flight to the city of Banyuwangi on Java island which is about a 90 min flight and will cost you about $90 AUD. From there it’s a quick ferry ride over to Gilimanuk on Bali then you can organise transport to Seminyak or wherever you’re staying. So, in short, you can get to Bali and it’s very doable. It’s just a matter of getting over to Jakarta and making your way over internally. Yes, it’s a bit slower and yes it’s long but at least you’ll be able to get to Bali.

Post update: Feb 2019 – since the last volcano eruption there has been no major volcanic activity. The airport has remained open and no flights have been cancelled. In short, it’s been fine. 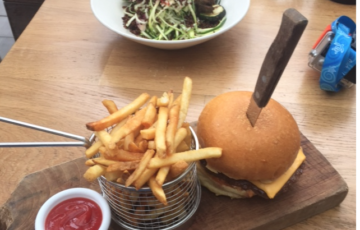 Casual cafes to Lunch in at Seminyak 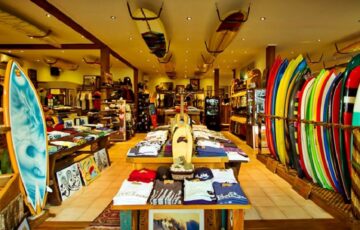 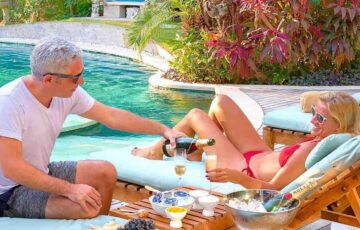 What to Expect With Your Holiday Villa Accommodation in Bali